This post contains affiliate links. As an Amazon Associate I earn from qualifying purchases.

Lego is awesome, but want to know how you make it even more awesome? Well you add a dose of Marvel and DC Super Heroes! That is right, today we are looking at the best Lego Super Heroes Sets.

We are looking at both Marvel and DC so no matter if you child loves Spider-Man and Iron Man or Batman and Superman, we have you covered. If you do feel your Spidey Sense tingling do not worry it just means that you have finally found that perfect Lego set for your child. 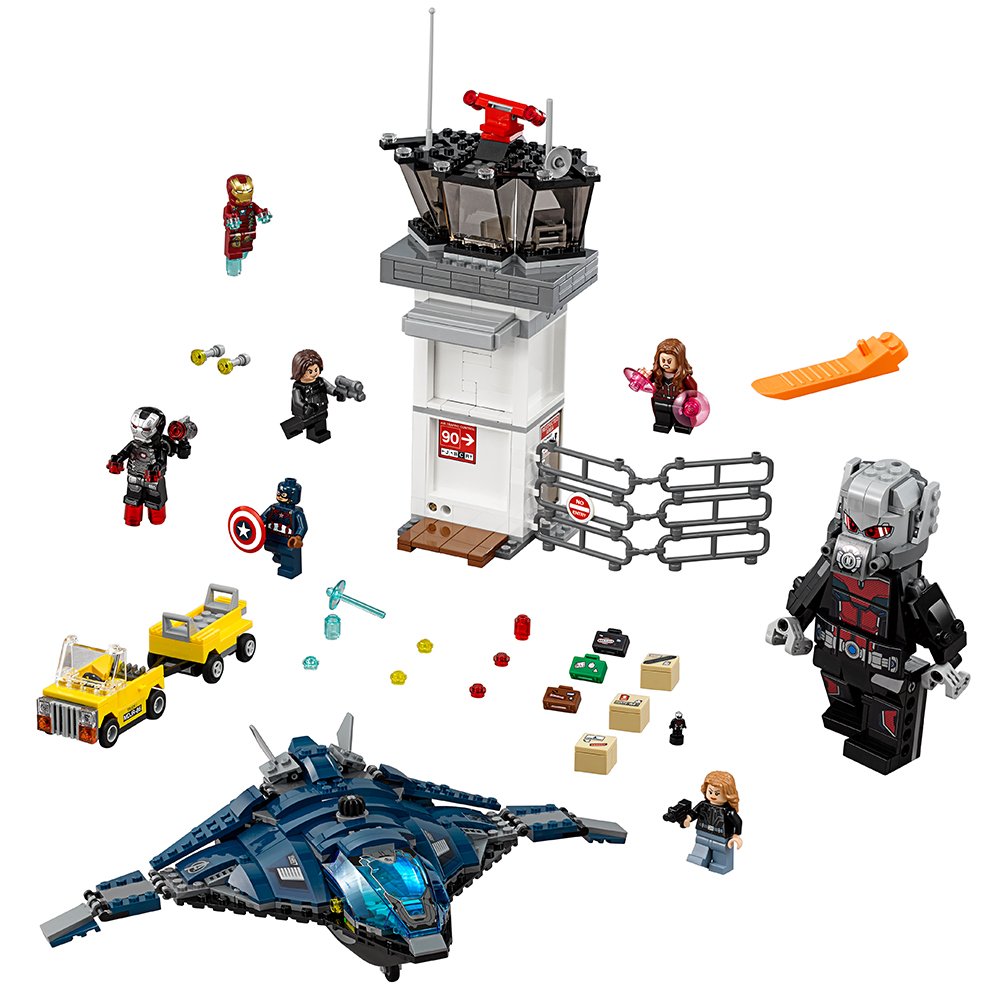 We have decided to start our best Lego Super Heroes sets with one of the bigger sets and that is the LEGO Super Heroes Super Hero Airport Battle.

This was the big scene from the Captain America: Civil War movie and now your child can recreate it with Lego! In this set you get 807 Lego pieces and it is aimed at kids aged 8 and up. The set allows them to build a really cool air traffic control tower, a Quin Jet that has opening cockpit, moveable wings and other cool features and some other fun accessories as well. 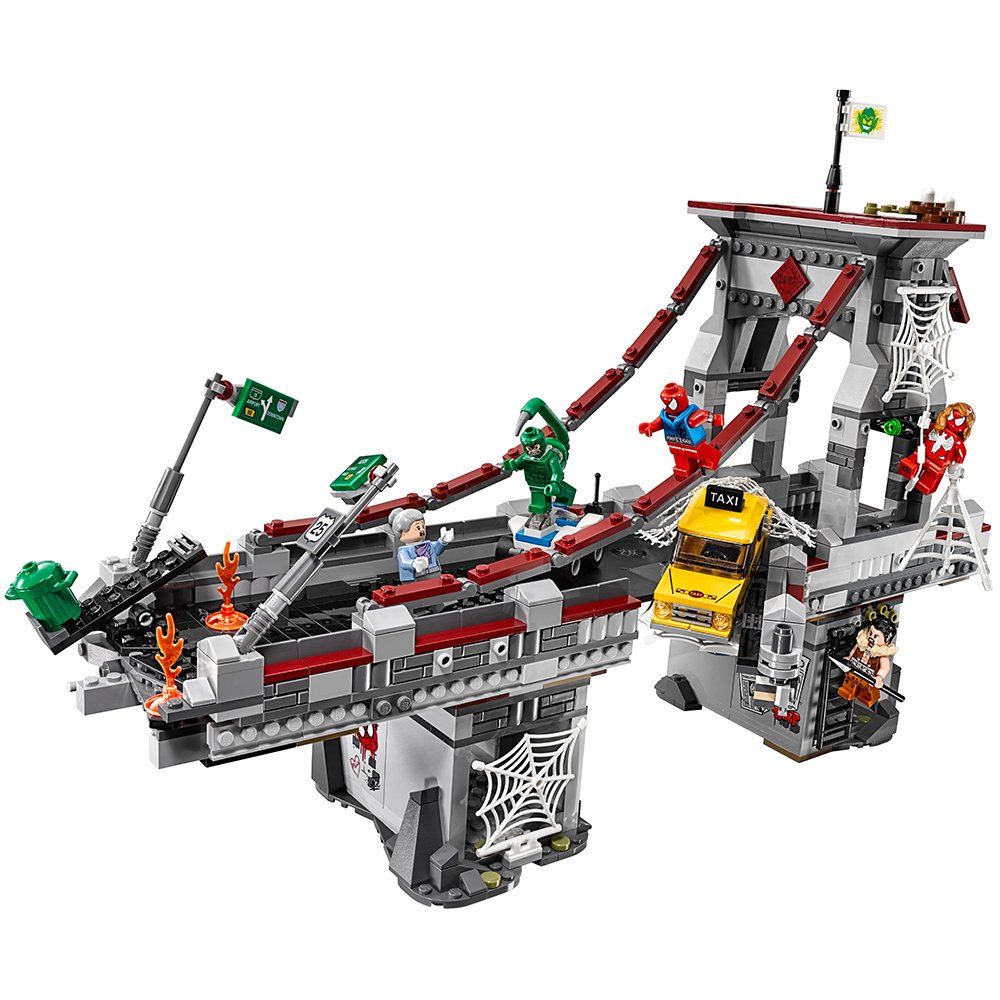 The LEGO Super Heroes Spider-Man: Web Warriors Ultimate Bridge Building Kit is one of the largest and most epic Lego super heroes sets on this list! The set is based on the very popular Ultimate Spider-Man series and as it has over 1000 pieces. Your child may need a little help putting this together which is not bad as this is a lot of fun.

8 – 14 is the recommended age for this large Lego set. The Ultimate Bridge building kit is a large New York City bridge that comes with cars, ladders, a tower and many other action features to play with. This is a great set and your child will have a lot of fun staging their own Marvel Super Hero battles with it.

The Ultimate Bridge building kit comes with four dastardly villains, The Green Goblin, Kraven, The Hunter and The Scorpion. These guys want to destroy this bridge, but do not worry as this set also comes with Spider-Man, Spider-Girl and the Scarlet Spider Lego mini figures to help save the day! 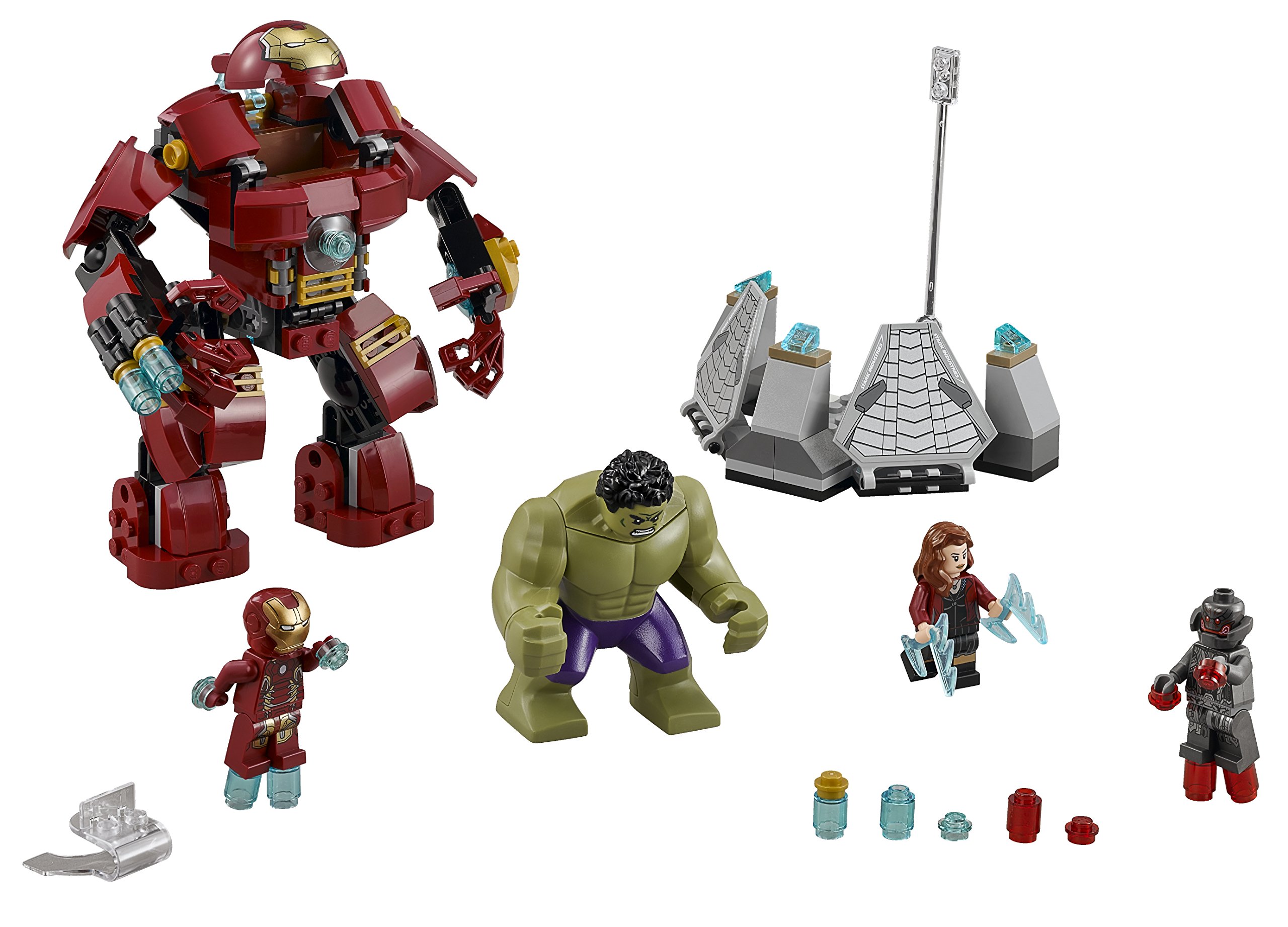 This may not be one of the largest Lego super heroes sets on this list, but the The Hulk Buster Smash is still a lot of fun! Based on the famous fight scene from Avengers: Age Of Ultron.

This set is for children aged 7 and up and contains 248 pieces. Most of the pieces of this set are used to make The Hulk Buster. The Hulk Buster is Iron Man’s special suit that he uses to battle the Hulk! This is something kids will love to build and then love even more to play with.

The set also comes with a large Hulk Lego figure, Scarlet Witch and Ultron. But we are not done there. You also get a little trap for Hulk and a special Iron Man Lego mini figure that can actually jump! This is a really cool set and one of the more affordable ones on this list. 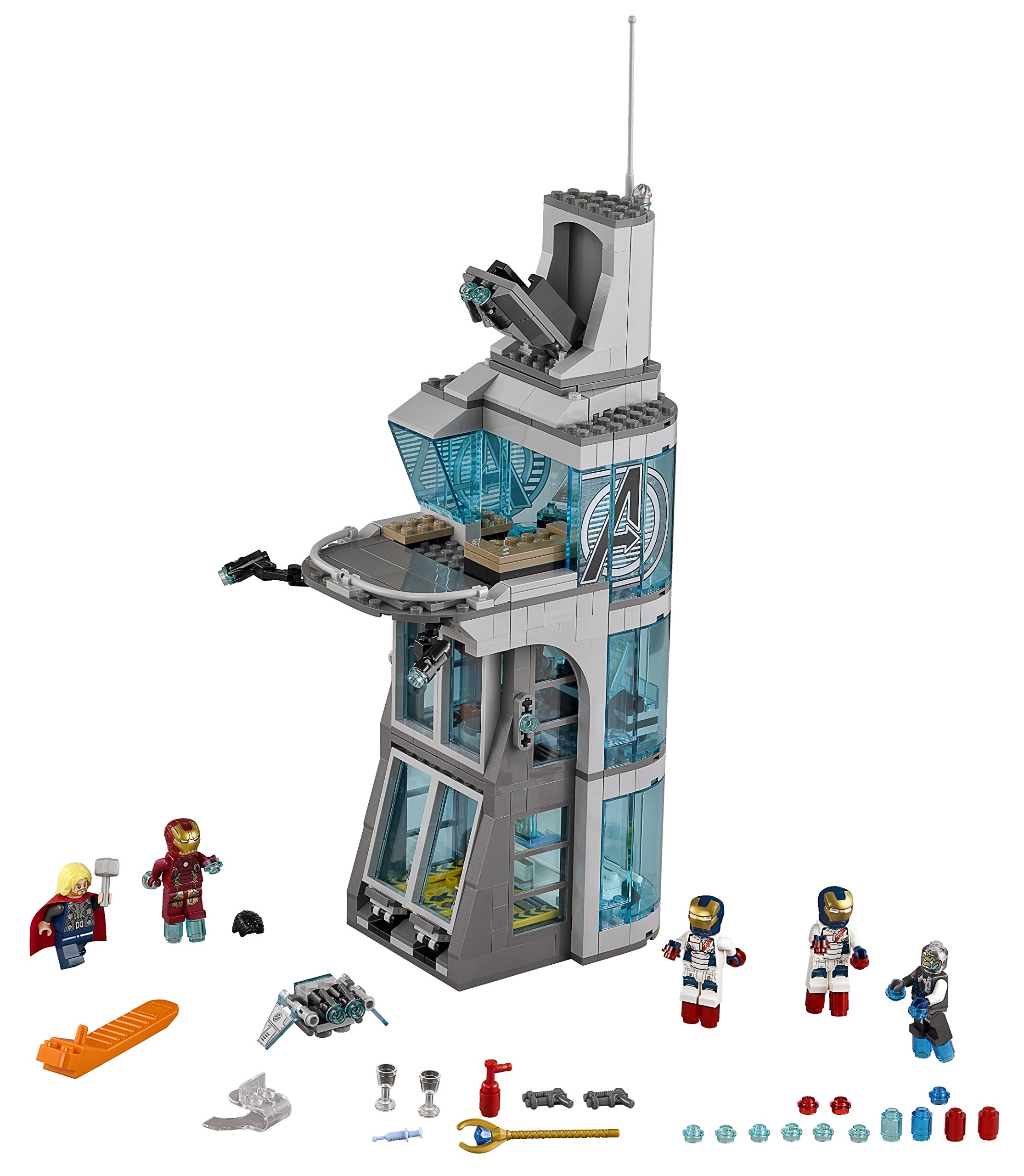 The LEGO Super Heroes Attack on Avengers Tower is a really awesome Lego set! This 515 piece set allows your child to build Avengers Tower. The cool part about this set is that it actually opens up once built and becomes a fantastic playset.

Avengers Tower has all kinds of hidden rooms including a super special one that is hiding Loki’s scepter! This is kind of bad news though as the included Ultron Lego mini figure wants to steal it! Lucky for the world that this set also comes with a Thor, Iron Man and two Iron Legion Lego mini figures to put Ultron back in his place.

The LEGO Super Heroes Attack on Avengers Tower is aimed at kids 7 – 14 and it’s the kind of Lego set that is perfect if you have a child who likes to actually play with their Lego creations. This is one of the best Lego super heroes sets on the market right now and we are sure your child will have a lot of fun with it. 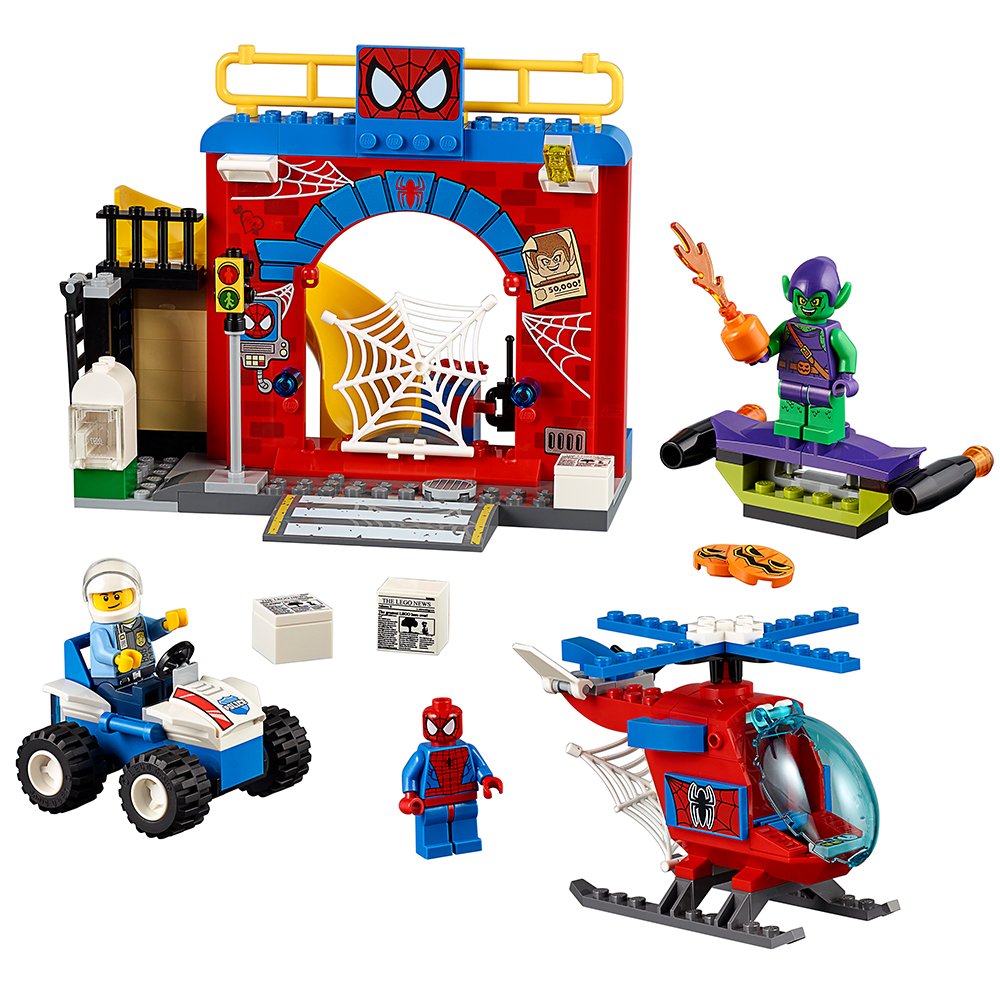 Next up we have this amazing LEGO Juniors Spider-Man Hideout Building Kit. This is part of the somewhat new Lego Juniors line so it is aimed at kids aged 4 – 7. It’s a lot of fun, but much easier to build so it is perfect for younger kids just getting into Lego.

This set comes with a hideout for Spider-Man, a place where he can relax and plan on what villains to capture next! It also features a Spider Man mini figure and a really cool Spider-Copter which is going to come in handy to catch the also included Green Goblin mini figure.

With just over 100 pieces this would be a great first Lego set for a child and something that will help them learn how Lego works. 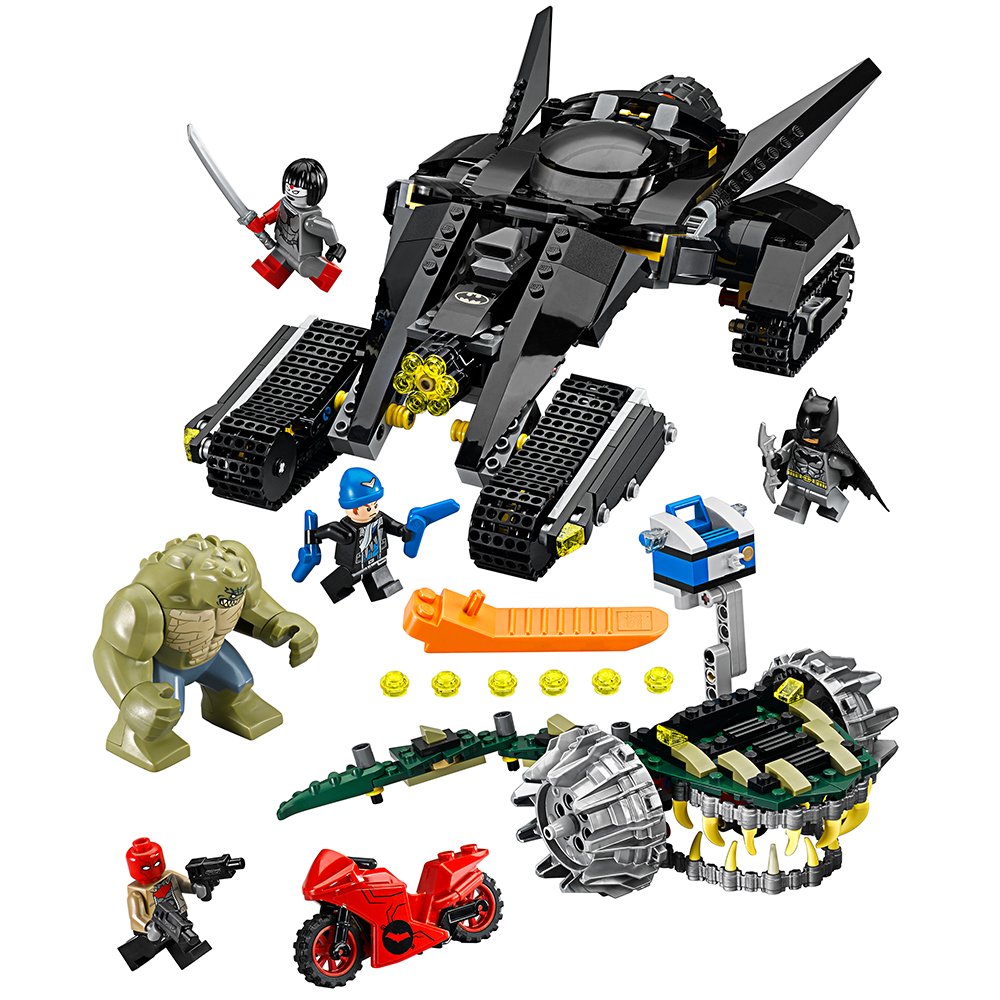 Aimed at kids aged 8 – 14 this epic Batman: Killer Croc Sewer Smash Building Kit is one of the most action packed sets on this list! This set features an all out street battle and definitely is one of the most epic Lego super heroes sets

The giant Killer Croc figure is on the loose and he is driving his Battle Chomper which has big crunching teeth! Killer Croc is joined by Captain Boomerang and Red Hood who also has a motorbike. Who can stop these villains?

Well this set comes with a Batman and Katana Lego mini figures so that is a good place to start. The real attraction of this 759 piece set though is the Bat-Tank. The Bat-Tank is really cool it has rolling track wheels, a battering ram and even a little stud shooter, it’s the ultimate way for Batman to take down the bad guys. 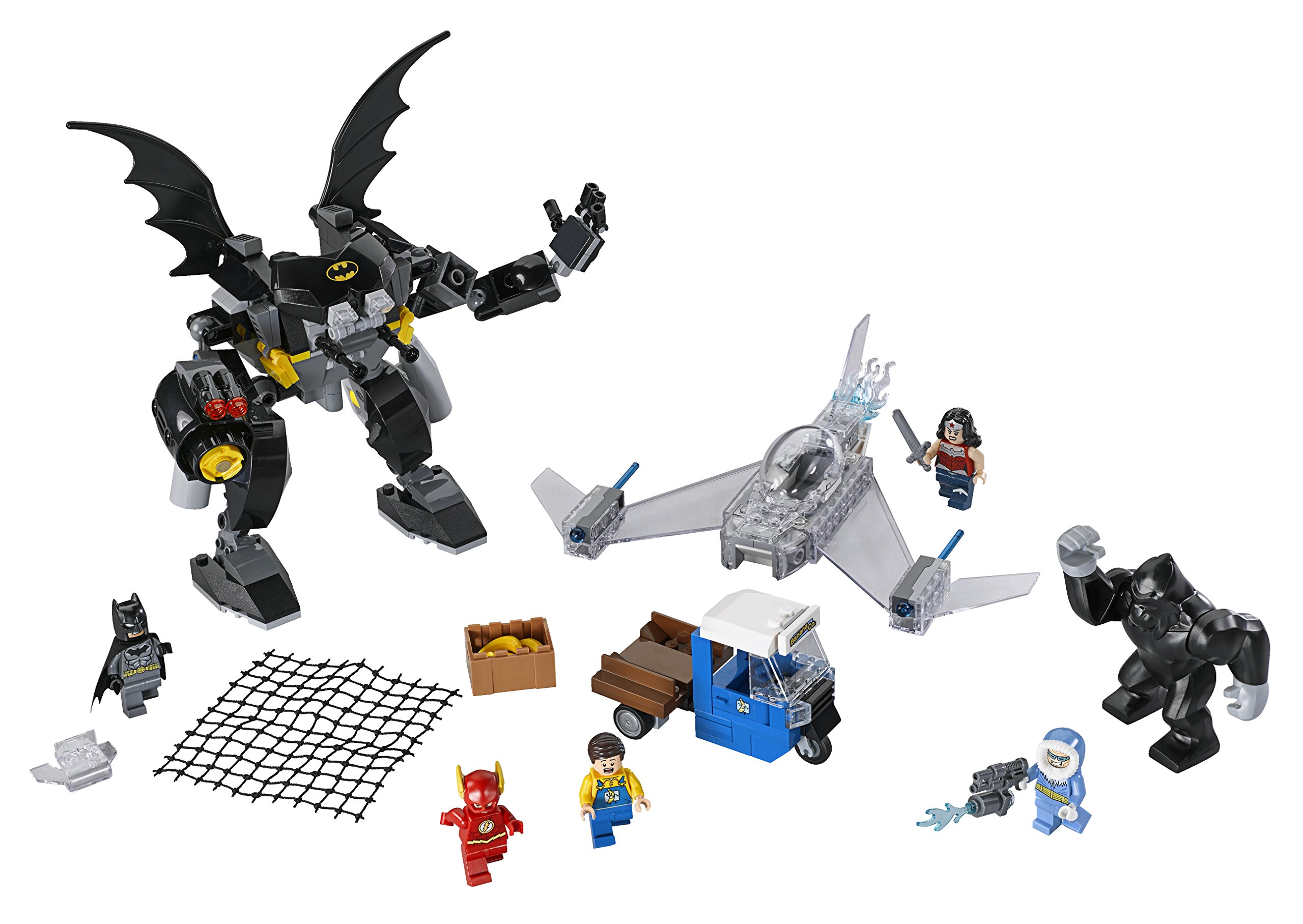 The LEGO Superheroes Gorilla Grodd Goes Bananas features a pretty crazy scenario. A banana delivery man is just trying to do his job when out of nowhere the big Gorilla Grodd Lego figure appears and tries to steal the bananas! He is not alone though as Captain Cold and his freeze gun are there to stop anyone who gets in their way. To stop villains like this, you need some real heroes and this set has some amazing heroes to save the day.

First of all we have the fastest man alive The Flash, but he needs a little back up and that’s why this set also comes with Batman and his Bat-Mech. This giant robot has a ton of features and lots of fire power to take the bad guys down. To help back up Flash and Batman there’s Wonder Woman who arrives just in time flying her invisible jet. 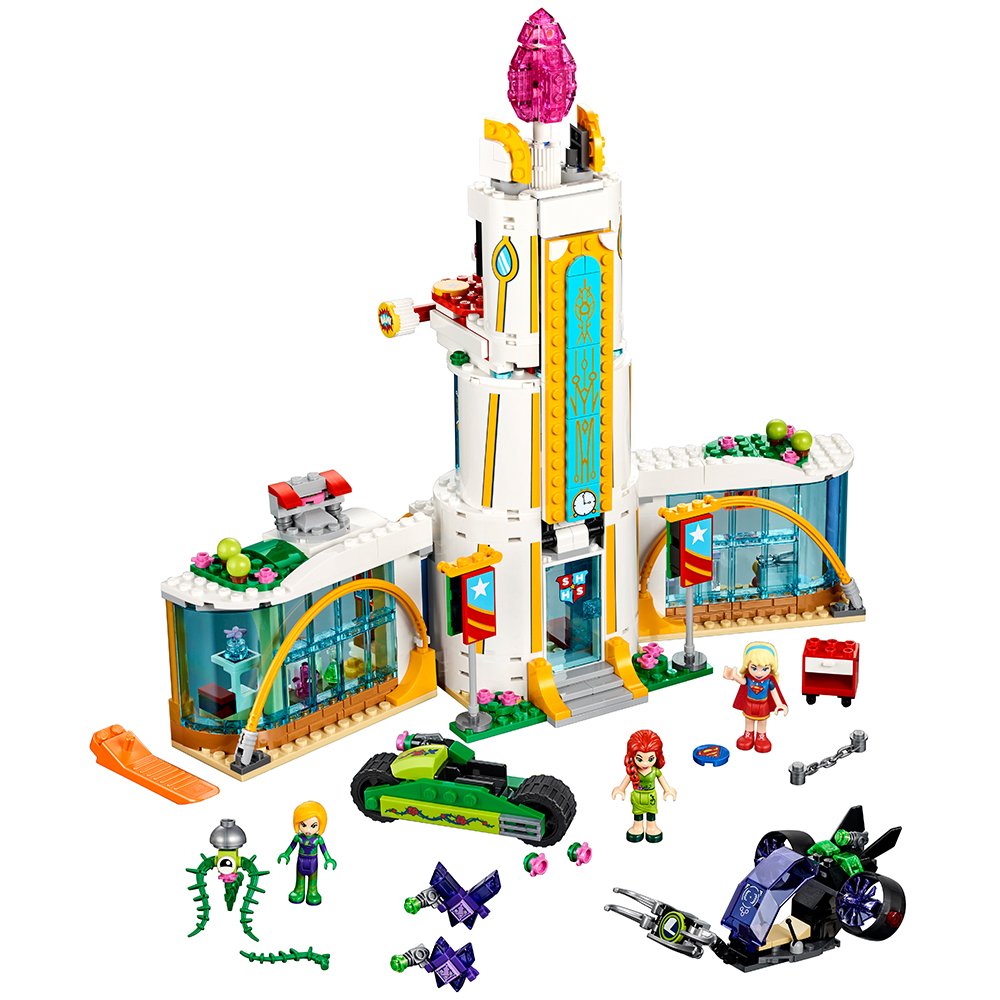 Super Heroes are not just for boys, the DC Super Hero Girls line has been very popular and now these Super Girls are available in Lego form!

This set allows them to build a really cool Super Hero High School. This school features three levels which have two classrooms and all other kinds of secret areas for the heroes to learn in. If bad guys try anything do not worry as the school can transform into defense mode with a battle ramp, disc shooter and a chain shooter as well.

Three really cool Lego mini figures are included with this set. Lena Luthor who has a really fun jet to fly in, Supergirl and Poison Ivy who comes with a really cool motorbike.

The LEGO DC Super Hero Girls Super Hero High School is one of the larger sets in this line at 712 pieces. It is for girls aged 8-12 and will provide a lot of fun.

As part of the Lego Juniors line the LEGO Juniors Batman & Superman vs Lex Luthor Building Kit would make for a great first Lego set, especially if your child loves Batman.

This action packed set features a mini Batcave that has all kinds of cool Bat Gadgets. Bat Gadgets which Batman is going to need as this set also contains a Lex Luthor mini figure who has a robotic vehicle! Batman is not alone though as he has his Batmobile and Superman to help him save the day. Thanks to the included catapult, your child will have a lot of fun making Superman actually fly!

This set is for children aged 4 – 7 and contains 164 pieces. It is much easier to build than a regular Lego set and will actually teach them how to use Lego. 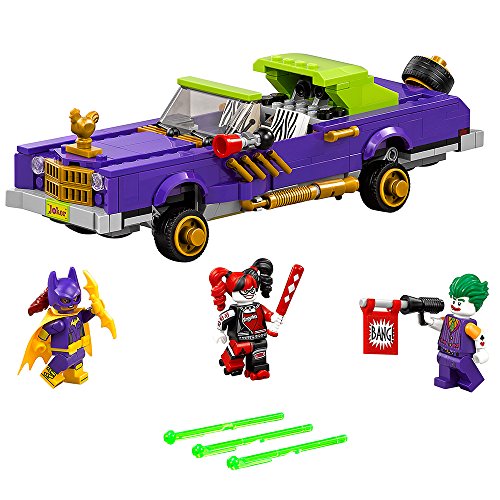 The last set on our list of the best Lego Super Heroes sets is based on the new Lego Batman movie!  The Joker Notorious Lowrider set features The Joker and Harley Quinn who are always up to no good!

This time though it is even worse as they are terrorizing the streets of Gotham in their Joker Lowrider. The lowrider is an awesome purple car that features all kinds of crazy weapons and gadgets which will help them stay ahead of the good guys. With lots of accessories, hidden areas and weapons this is one lowrider that means serious business.

The set also comes with a Batgirl Lego mini figure which is just what is needed to help put a stop to these two’s crime spree. This set contains 433 pieces and is aimed at children who are aged 8 – 14.

KidsDimension.com is a participant in the Amazon Services LLC Associates Program, an affiliate advertising program designed to provide a means for sites to earn advertising fees by advertising and linking to amazon.com.

We are in compliance with the requirements of COPPA (Childrens Online Privacy Policy Protection Act), we do not collect any information from anyone under 13 years of age. Our website, products and services are all directed to people who are least 13 years old or older.

Popular with our readers